HOLY CRAP!
So, today I got news that Lockheed Martin had been hacked from a vulnerability stemming from the RSA breach in March. I was a bit taken aback by this as I have always known the folks at LHM to be pretty stout when it came to INFOSEC. There are quite a few INFOSEC pundits that are saying that this may be just the beginning. While, I am not a hard core INFOSEC type, at least not a Red-Team guy, I wanted to post a quick and easy way you can monitor for brute force attempts on your RSA environment. I have a number of queries that I have set up to monitor our RSA environment but this one was pretty low hanging fruit so I thought I would share it.

I am making the following assumptions: (this is not as hard as you think if you are doing this for the first time)

Getting the Data:
So, for $245 you can get a full copy of KIWI Syslog Server. Before you start chuckling, I have worked with the six figure Event Correlation Products and frankly, I don’t find them to be as flexible as KIWI logging to SQL. At any rate, if you can get a copy of KIWI Syslog Server you can start sending your logs to your SQL Server and begin the process of reporting on them. You can download a 30 day full version that you can prove works then ask your boss for the money as well.

The first thing you will need to set up is a rule for collecting your RSA Logs and filter on the IP Address of your RSA Server that will be sending the logs. As you can see below, I have set up a filter for the RSA Server at 192.168.1.25 to capture all syslog data coming from that box.

Next, we will need to set up a custom DB Format, in KIWI you only get ten so use them wisely, this is a generic Custom DB Format using no custom fields. We are copying to the database MsgUnique, MsgDateTime, MsgHostAddress, MsgHostname and MsgText with the latter three being switched from “text” to “varchar” (Very important step, will not work if this is skipped) 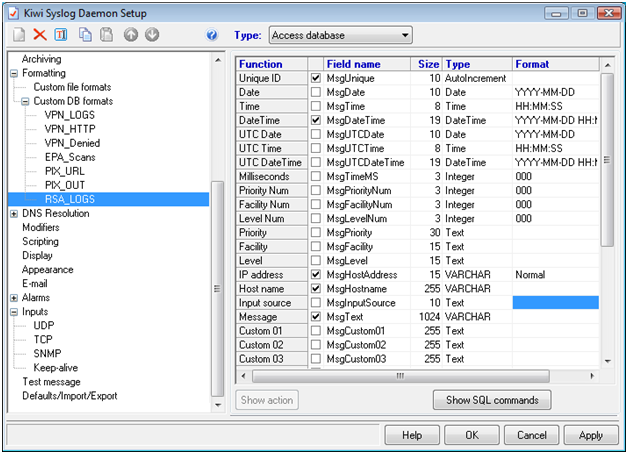 Once we have set up our custom DB format we will go back to the rule and select an Action called “Log Event to Database” using the “Log to ODBC Database” option from the Action combo box. From here, you will select your custom format in the Database Type/Field format dropdown box and press the “Create Table” button. Once this is done you can click “Apply” and you should start seeing logs immediately.

Now comes the fun part:
While I understand RSA is a major security player, I have to say, I am disappointed in their logs, they look like shit! Parsing them was really, really tough for me (I am not a programmer) but I did get a substring Query that should yield some results.

Once you are writing data to the database, use this query to check for pin failures. From SQL Management Studio type the following Query:

Monitoring for Brute Force Attempts:
So after getting the data where I needed it I set up a monitor to watch for brute force attempts on RSA Accounts.

Below is an example of the email I receive when the number of pin related failures goes beyond a set threshold. If I were to get one of these and see one user account with 10-20 failures, that could indicate a brute force attempt. 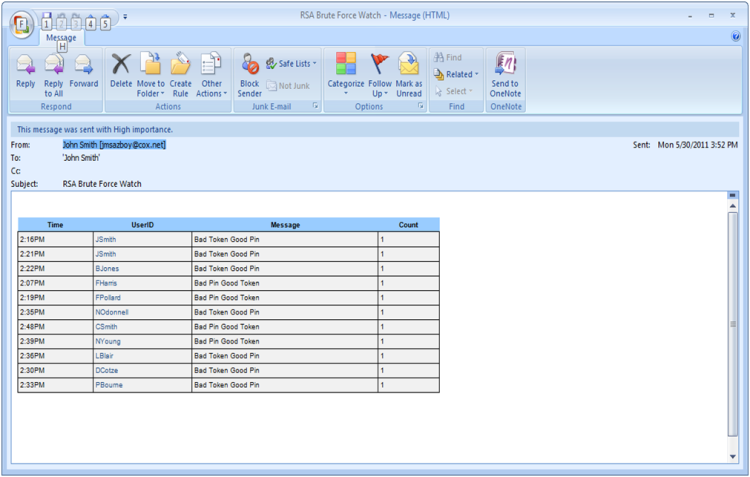 To get this email set up, I have written a SQL Stored Procedure that will monitor the table every five minutes and report back to me if someone has more than 3 failed RSA attempts within a 15 minute period.

To set up the stored procedure you will need to copy the following SQL Into your Management Studio and execute it. You will then need to set up SQL Mail and SQLAgent to be able to execute the job.

EXEC msdb.dbo.sp_send_dbmail
@profile_name = ‘SQLMail’,
@recipients = ‘%YOUREMAILADDRESS%‘,
@body = @tableHTML,
@body_format = ‘HTML’,
@Subject = ‘RSA Brute Force Watch’,
@importance = ‘High’;
end;
Conclusion:
The LHM Hack was a shot across everyone’s bow. This isn’t some smug-tard at GAWKER, this is an major player in the Information Security scene. Until this RSA Breach is fully understood and mitigated it is possible that all we can do is monitor our logs and make sure specific accounts do not get compromised. If you have any issues with either the query or stored procedure please let me know and I may be able to walk you through it. (I have a gotomeeting account)